Ife is a 28 year-old woman from Guinea. She left her husband and child behind with her family and moved to Belgium alone, and she wishes they could be reunited.

Over the 12 arts therapy sessions she attended, the re-occurring themes in her work appeared to be ‘blackness’ and ‘suns for hope’. 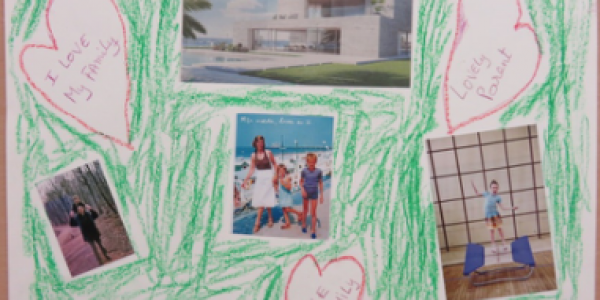 Ife seems to be a leader. She is always helping other participants when they need advice or additional help on their art work. She is always very engaging.

For the first session, she chooses pictures of houses and families together.

“You need a home to feel at ease, I love my family."

During sharing time, she takes the artwork of others to have a closer look and tell them what she thinks. Sometimes she is too straightforward and doesn’t take into account how it can affect the other patients.

However, there were other sessions that Ife was less cheerful and did not want to get involved.

One particular time, she claimed she couldn’t draw, but she drew a house and a family anyway.

“I hope one day I will be with my child in the same room, inchalla". 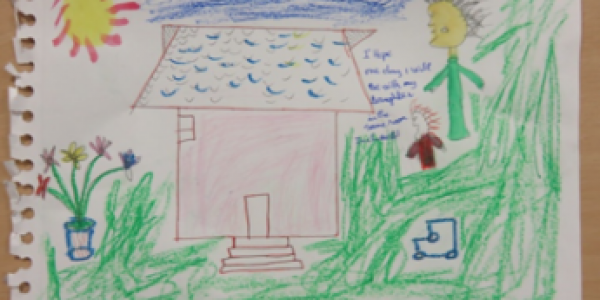 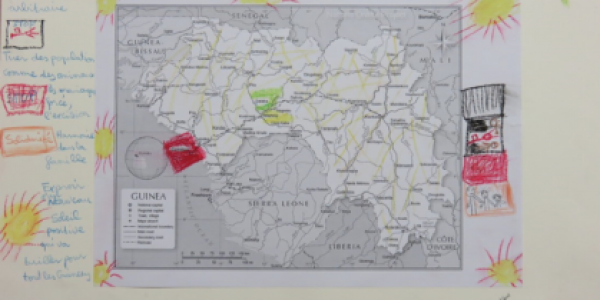 On another occasion, Ife came to the workshop tired and depressed. She still didn’t believe in herself, and did not think she could draw.

She coloured in her country and wrote a caption.

“A lot of innocent people are put in prison, and a lot of them are killed like animals. A lot of women and children are forced to marry. I want all these things to stop", she said.

She loves the solidarity between families and hopes the sun will shine once again in Guinea.

There was this other time when she had a cold, she was coughing and sneezing. She went to sit by the heater. She chatted and laughed when it was time to share, though.

But she did not want to do the art work because it would dirty her hands. Finally,  she completed her drawing wearing gloves and said it showed her as a person. 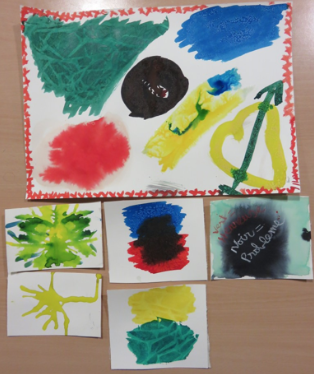 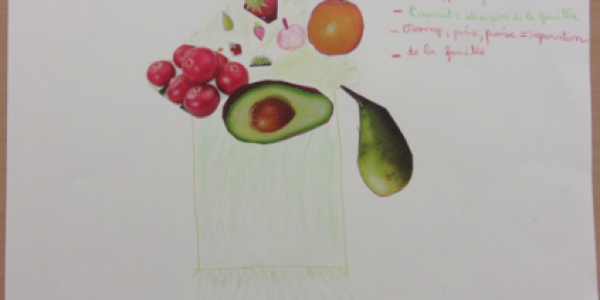 Surprisingly, Ife came strolling in, cheerful and smiling, to the following workshop.

Not budging away from her main theme, she drew a trunk that would represent her family. The fruit showed how her family used to be connected, but now not so much anymore.

The roots however, never totally separated, showing that her family will always love each other.

The next time, she was back to feeling sad.

She chose a picture of a child looking out the window and wrote a story about the child, saying that it is looking for someone.

She imagined that her child is looking for her. She drew a crying baby, surrounded by darkness.

But the sun showed hope.

When the art therapist tried to help another participant who was stuck on their art work, Ife showed him her drawings for inspiration.

During sharing time, she played games on her phone, as if she got too overwhelmed by her emotions. 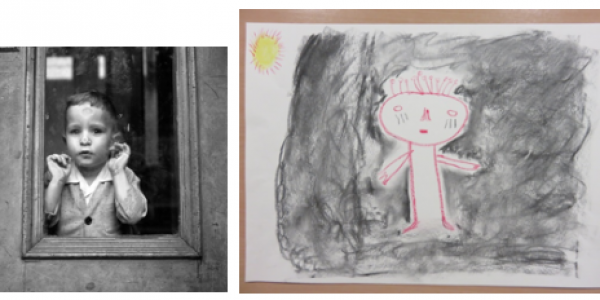 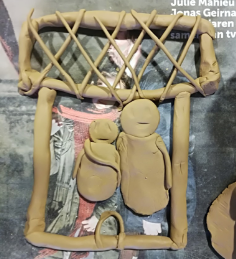 As Ife walked in cheerful and seeming more awake at the next session, it was getting more and more obvious that she is very prone to mood swings.

That day, she chose to make a house, that reminds her of her house in Guinea, where she and her child lived. She pictured herself with her arm around her child.

The next time, she was still cheerful and happy, and came to the centre ready to work.

The assignment given that day forced her to symbolise herself and her life, which is not easy.

She laughed when drawing and kept asking others what they thought of it. She wanted her drawings to be good.

She said that when she feels bad, she would like to fly.

She drew herself as a bird flying. She said that birds are nice and seem careless. The black bird was a symbol for problems.

She then explained that sometimes she feels fire within herself, as if she’s burning. And just like you can’t touch fire, you can’t touch her. She doesn’t want people around her. She wants to be on her own, cry, and then the fire starts to disappear. 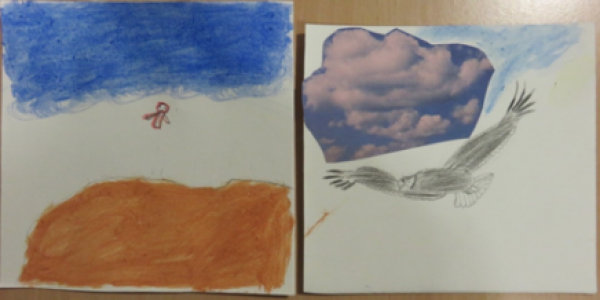 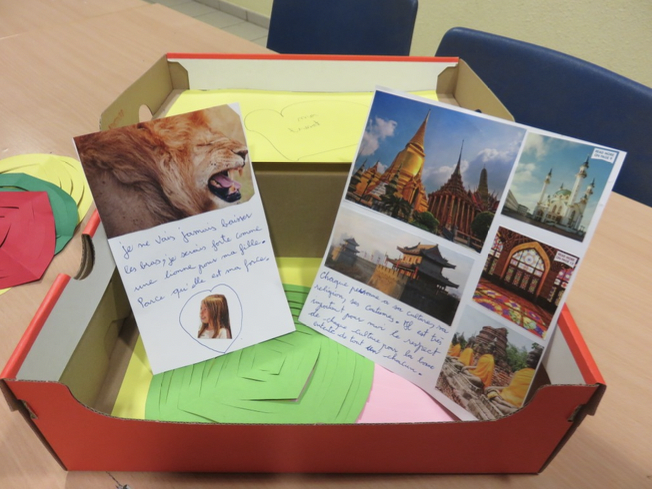 For the next session, Ife walked in with a friend. That day she also translated for other participants.

During creation time, she made a paper garland. Everyone was very suprised. She taught us how to do it.

In the collage she chose a lion because she is strong. She’s a lion for her child.

Before the session began, Ife chose a picture of a man who looks unhappy. She was crying a lot, not really sleeping because she was always worrying, and was very stressed.

During the sessions, then she began choosing pictures of different people. She met a lot of new people from different countries and cultures, and even made friends whom she sees outside of the sessions.

After this programme, she said all she wants is to be happy and to be with her child.

She wants to be like Khaleesi, a character of the series Game of Thrones.

She wants to be somebody who keeps fighting. 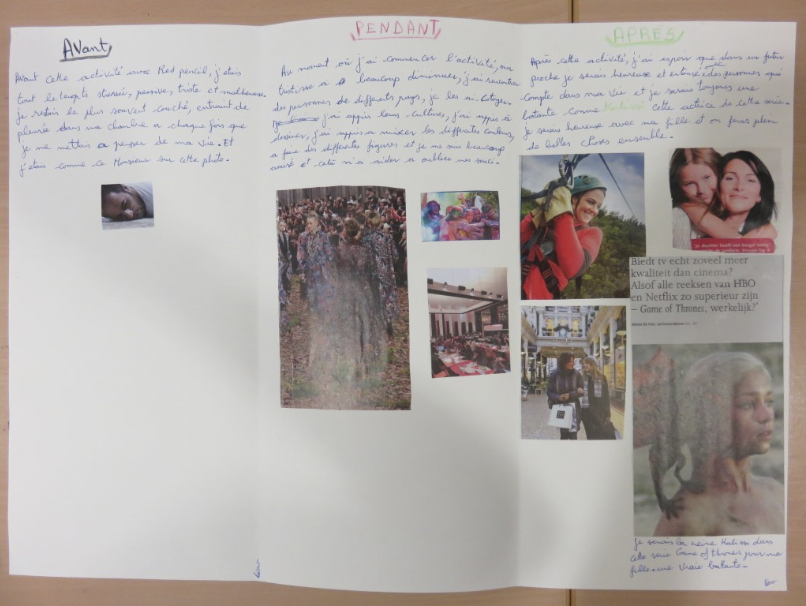